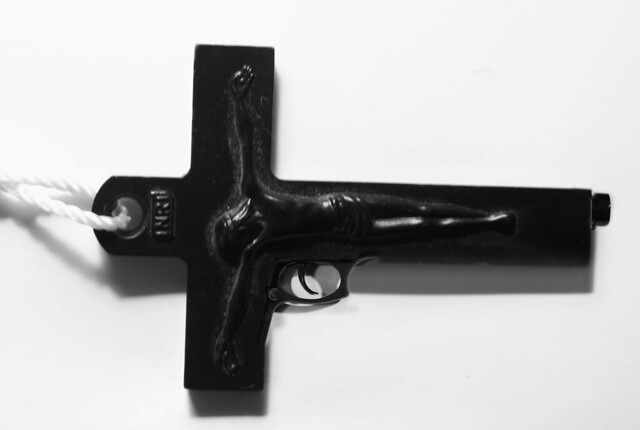 Those in the anti-gun camp often wonder why it is that their pro-gun counterparts seem to be immune to logic or reason in the ongoing gun control debate.  It has occasionally been suggested that love for firearms has become something of a religion.  The comparisons are obvious.  True believers in both god and guns are devoted in a way that defies argument or scientific dispute.  And, to non-believers, this devotion simply makes no sense.

A recent interview with psychoanalyst Luigi Zoja suggests that there may be something to this comparison, saying:

Because of [America’s] separation between church and state, it’s full of unconscious, undeclared religion: America itself is a religion of democracy, and the gun is a symbol of democracy. So partly because of its history, and partly because the gun belongs to a collective archetype present in every country, guns in America are imbued with a religious quality.

Though I would argue that the separation of church and state has done little to actually keep religion out of government, it is easy to see how the religious-minded would seek to substitute guns for god.  Just as the Constitution is a secular substitute for the Bible, its Second Amendment—by guaranteeing that their right to worship guns “shall not be infringed”—offers a stand-in for a state-approved deity.

It is easy to see why this has been embraced by Republicans, or at least the more religiously fundamental members of the party.  Guns are a physical symbol of their beliefs, a show of strength against the temptation of liberalism.  This also explains how “sinful” behavior—homosexuality, atheism, abortion, or pacifism, to give just a few examples—can bear the blame for mass gun violence, while the weapons themselves are innocent.  Their god is a vengeful god and guns are merely the tool by which this vengeance is enacted.

Guns also offer an outlet for many of the urges that fundamentalists are forced by their religion to repress.  Zoja continues:

[W]e have to be equally aware of the pathological, almost pornographic, side of America’s preoccupation with guns. Psychologically, owning a gun has become a naïve expression of macho masculinity — a show of sexuality and arrogant power.

So, by limiting their ability to admit weakness or vulnerability—physical, mental, sexual, or otherwise—and by forbidding believers from giving in to normal human urges, this fundamentalism forces guns to become a universal form of expression.

All of this helps provide some context for the strength of the GOP devotion to guns, but it does little in the way of offering solutions.  Just as science does little to lessen religious fervor, logic stands little chance of dissuading gun advocates.  Therefore, the only hope lies not in science or logic, but in math.  Only by outnumbering these fundamentalists can anti-gun groups hope to enact any meaningful change.

One thought on “The Holy Trinity: God, Guns and the GOP”