A recent survey found some encouraging news for anti-gun folks:

This may not mean much right now, as the huge number of guns owned by Americans continues to be a huge problem, regardless of who owns them.  But, it could mean good things for the future.  ThinkProgress paired this news with a chart showing a projected decline in the percentage of the population composed of whites, with Hispanics, Blacks, and Asians all increasing: 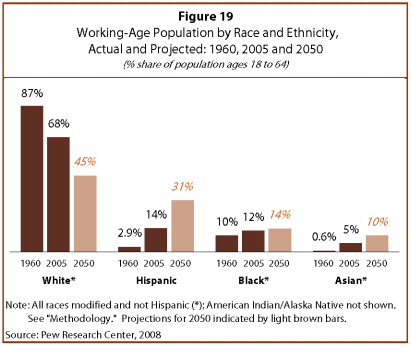 So, assuming that current ownership trends continue, it appears likely that gun control may follow in the steps of drugs, gay marriage, women’s health care, and other one-time minority opinions that are rapidly gaining support.  As American demographics change, so might the laws.  We can only hope that as the percentage of the population that owns guns continues to shrink, their influence over legislation will follow suit.

Of course, this is taking the very long view of a problem that has daily, immediate consequences.  But, on the heels of the recent discouraging defeat of gun legislation in the Senate, any good news is reason for optimism.