The latest troubling issue that gun advocates are hoping to sweep under the rug comes in the form of a report from the Bureau of Alcohol, Tobacco, Firearms and Explosives, more commonly known as the ATF.

Though gun lobbyists and their GOP friends have successfully kept the Bureau from naming a permanent head for the last seven years, this has not kept the ATF from doing the work of monitoring gun sales and ownership.

And this monitoring has uncovered the fact that gun owners and sellers are doing very little monitoring of their own when it comes to the whereabouts of their guns.

This chart from the report details the guns reported lost or stolen in 2012 by Federal Firearms Licensees (that is, gun sellers licensed by the federal government): 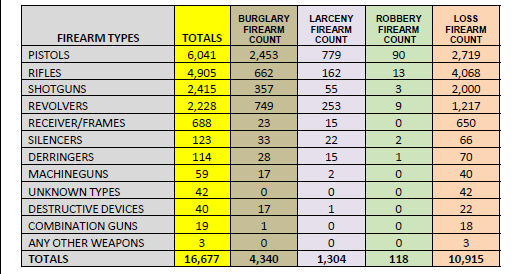 More than 16,000 weapons were either stolen from or lost by licensed gun sellers last year.  That is a lot.  But, for every one of these lost or stolen guns more than 10 guns were lost by or stolen from private citizens.  Here is a state-by-state breakdown:

According to the ATF report, 190,342 guns were reported as lost or stolen in 2012.  While this number represents far less than one percent of the estimated 300,000,000+ guns owned nationwide, it is believed that stolen guns are used in up to 15 percent of crimes involving firearms (if this number seems low, it is because most guns used in crimes are purchased illegally rather than stolen).

This statistic may be surprising, but it is not correct.  In truth, the actual number of guns that were either lost or stolen last year is likely far higher than that in the ATF report.  But, due to limited funds for ATF audits and lack of reporting from private citizens, many lost or stolen firearms are not accounted for in the report.  As the ATF says:

It is clear that any gun violence prevention agenda must include measures for proper security and storage of firearms, both by gun sellers and private citizens.  This could be largely addressed through two methods.

First, sellers must regularly inventory their guns.  The fact that they are not already required to is baffling and should be immediately remedied.  Sellers of all products regularly track their inventory, and sellers of potentially deadly weapons should be even more careful in monitoring their products.  Yet, the ATF cannot currently require gun sellers to conduct an annual inventory.  And, due to budget limitations, they were only able to inspect about 13,000 of the almost 70,000 gun dealers nationwide, and only about half of all gun dealers over the last five years.  This must change.  Additionally, gun sellers should be required to properly secure all firearms in their shops to prevent theft.

Second, gun owners must properly store their weapons.  This can be easily accomplished through use of gun safes (which store guns securely) or gun locks (which prevent them from being fired accidentally).  Because there is no current safe storage legislation, even many gun owners with children do not take proper safety precautions.  A survey from 2000 found that only 39 percent of these gun owners kept their weapons both locked and unloaded, while 43 percent had at least one unlocked firearm and 13 percent had an unlocked firearm that was either loaded or stored with ammunition, a figure that represents 1.4 million homes and 2.6 million children with access to a potentially loaded weapon.  The obvious secondary benefit of keeping a gun in a safe is that it is much less likely to be lost or stolen.

So, why are these common sense rules not already in place?  Many gun advocates claim that measures like universal background checks are ineffective because criminals will just avoid them by stealing the guns they desire.  So, it would logically follow that they would support legislation that would prevent gun loss or theft.  Yet, this is not the case.

Their continued refusal to back such measures only reinforces the image that gun owners are reckless and more concerned with “freedom” (which is really just code for absence of gun regulations) than human lives.