News came out today that Bill and Melinda Gates have made a $1 million donation to support a Washington state bill that would require background checks on all gun purchases.  On its face, this is great news, as the Gateses join fellow super-rich folks like Michael Bloomberg, Paul Allen, Steve Ballmer, and Nick Hanauer in donating towards sensible gun control initiatives.  And, while I wholeheartedly support any attempts to mandate background checks and any other measures that would limit gun violence, I was also a bit saddened to realize just how much money is being spent on this nonsensical debate.

Many are celebrating the Gateses donation, including Cliff Schecter at the Daily Beast:

Gates’s fame brings more attention and further legitimizes the initiative in a way that almost nobody else could. Once the Gates Foundation made it a priority to combat malaria around the world in 2000, it brought down deaths due to the insect-borne disease by 20 percent in 11 years, saving the lives of 1 million African children in the process.

Gates has the ability to grab headlines and make an issue go viral with the constant media coverage he receives, and the financial ability, if he wins, to fund similar efforts around the country. His involvement could be the answer to the public health crisis that makes American children 93 percent of those murdered in the 26 high-income countries around the world.

But, in those paragraphs lies the most tragic part of the entire debate, namely that so much money is being spent on it that could better be spent on other things.  The Gates Foundation has already shown the good that can be done by philanthropic billionaires, and its malaria prevention effort has already saved more lives than any gun control effort ever could.  And, sure, the million dollars donated in Washington is dwarfed by the budget his Foundation spends fighting disease, but even that million dollars could do a world of good if spent elsewhere.

But, because of groups like the National Rifle Association, who spend absurd amounts of money fighting any and all efforts to keep guns out of the hands of potentially dangerous people, Gates, Bloomberg, and all the rest are now spending their money fighting against the NRA.  And, the Gateses’ million dollars, along with the $50 million donated by Bloomberg, are still dwarfed by the hundreds of millions spent by pro-gun groups.  The Washington Post details spending from 2010: 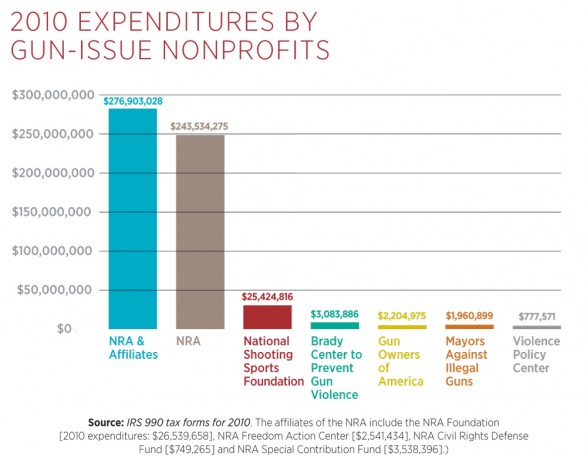 Just imagine what all that NRA money could be used for if not for their obsession with guns.  They could fight hunger and homelessness in America, cure disease, or fund research.  But, instead they choose to spend it on making it easier to buy guns.  What a waste.

So, yes, Gates and his billionaire buddies should be applauded for entering the fight against the gun lobby.  Their efforts, and their money, could potentially save thousands of lives.  It’s just a shame that they have to.

One thought on “Is this REALLY where we should be spending all that money?”