The big news today in the world of business was the announcement that Steve Jobs is resigning as the CEO of Apple.  Fanboys and investors alike erupted in cries of disbelief, and the price of Apple stock fell more than five percent immediately following the announcement.

News of Jobs’ decision spread quickly on Twitter as well, with most treating it like a blow from which Apple (and their loyal iFollowers) would not be able to recover.  But, let’s be honest.  Jobs has led Apple to the pinnacle of the tech world, and he would not be resigning if he had any doubts that the company would carry on just fine without him (even though he will remain as Chairman of the Board).  But, there was one voice of reason among the crowd (there may have been others, but none that I saw).  Mike Elk (@MikeElk), a writer for The Nation and In These Times expressed his concern that one man leaving his job was garnering a far greater amount of attention than the thousands that are forced out of their jobs every day without the safety net of massive adulation and billions of dollars.

Elk released a series of tweets reminding people of Apple’s poor worker’s rights record, outsourcing of manufacturing jobs, and the suicide of many workers in Apple’s Chinese factories. 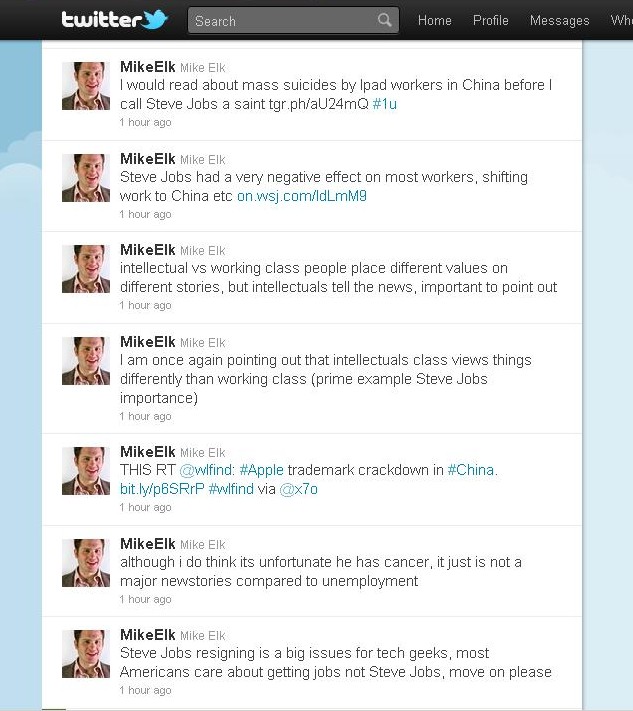 A few tweets from @MikeElk

But, people don’t want to hear about such things, preferring to treat Jobs as a deity of the tech world, the almighty creator of the Mac, the iPod, the iPhone, and the iPad.  And, they refused to tarnish their perception of Jobs by peaking behind the curtain at the byproducts of Apple’s rise to power.

I must make a confession here.  I do own an iPhone, as well as a Mac laptop.  But, a company can simultaneously make good products and treat their workers horribly.  As much as Jobs and Apple should be celebrated, they should also be criticized, as their good works do not erase the evils they have done.

This isn’t to say that Jobs is not a newsworthy figure, or that his resignation won’t have an impact on both Apple and the financial community.  But, it is nice to have a reminder that there are other things that matter, that there are other people whose jobs (or lack thereof) are equally as important.  Jobs has been plagued by bad health, and I wish him well, but again, at least he has the ability to get the best medical care that money can buy.  Others are not nearly so fortunate, and it’s important that we remember them.  Thanks to Mike Elk for reminding people of what truly matters.